Our staff features exceptional people: teachers, educators, mentors, positive thinkers, and experienced volleyball minds. Our coaches share a deep passion for volleyball and view athletics as a vehicle by which many of life's lessons can be learned. We encourage you to read about our people, both here at LAVA Ventura ("VC") and also our LAVA staff as a whole.

*We would also like to welcome the coaching staff of Blue Crush Volleyball Club, who joined our ranks in June of 2021!

The Director for LAVA Ventura is long-time Ventura County volleyball coaching fixture Kim Machnic. Kim has coached multiple levels of youth and juniors club and high school volleyball, and was prior to joining LAVA the Founding Director of Blue Crush.

Formerly the Founding Director of Blue Crush Volleyball Club in Ventura, Kim took the reins of LAVA Ventura in June of 2021. Kim's full bio is forthcoming!

Brad Lyans is one of the finest volleyball coaching minds in Southern California and the Head Coach of the Ventura College Women's Volleyball Program. Brad has built an impressive résumé with nearly two decades of coaching at the club and college levels.

Brad first joined LAVA Co-Founders Nabil Mardini and Trevor Julian at SMBC Girls in 2006, working closely with both men as a club and collegiate coach. He has logged successful stints with both SMBC and LAVA, coaching numerous Adidas teams to Division One Gold contention and amassing a wealth of high finishes at national tournaments, highighted by a Gold Medal at the 2012 Volleyball Festival National Championships in Phoenix, Arizona.

Brad has also found immense success at the collegiate level, first as an Assistant Coach with Nabil at Pierce College before taking the helm of his own program at Ventura College, where he remains. Brad has logged multiple seasons as Head Coach of the Ventura College Women’s Indoor Team, not to mention Head Coach of the Ventura College Women’s Sand Volleyball Team, and has his Lady Pirates poised for significant successes in this season – and seasons to come – both on the court and on the sand.

Brad took the reins of LAVA Ventura and SMBC Ventura ("VC" for short) in November of 2020 and helped guide the program through the challenges of the pandemic. His exceptional knowledge of the Ventura County volleyball community and his passion for coaching and teaching young people became immediately apparent to all Ventura families.

We are thrilled therefore to have Brad step into the role of Master Coach of LAVA Ventura!

Jon Ballard is one of our excellent returning LAVA Ventura coaches. His full bio is coming soon.

Janee Hines is one of our excellent returning LAVA Ventura coaches. Her full bio is coming soon. 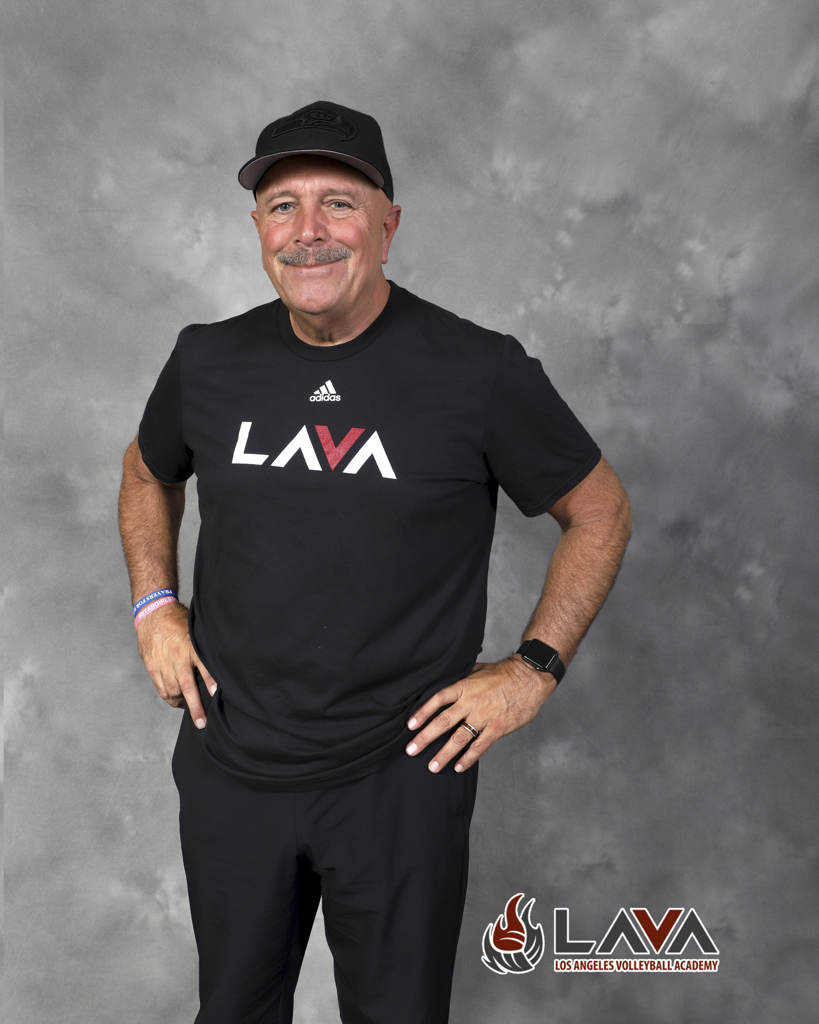 A fixture and pillar of the Ventura County volleyball community for more than three decades, Jack Richards is also one of the area's most recognizable and accomplished coaches across the high school and club levels. Jack is one of our excellent returning LAVA Ventura coaches.

Jack was the Head Varsity Girls Coach at Buena High School for more than twenty years and the Head Varsity Girls Coach at St. Bonaventure for eight years before retiring from high school coaching. Jack guided his squads to multiple league championships and CIF successes, earning six Coach of the Year awards in the process. His 2004 Buena squad also finished Top 25 in the nation as he was named CIF-SS D1 Coach of the Year.

Jack has been a pioneer on the indoor and beach volleyball club circuit, first as the Owner/Director of Channel Islands VBC for 15 years, then the Owner-Director of Rincon Volleyball for several years with its own dedicated three-court facility. In recent years Jack opened a six-court oceanfront beach volleyball facility at Harbor Cove Beach at Ventura Harbor, which is also commonly called “Rincon Beach Club”.

Jack is highly decorated: he was honored by Time-Warner Television as one of the Nation's "Coaching Legends" sharing a TV episode with Legendary Mater Dei Football Coach Bruce Rollinson; he was recognized by FoxWest Sports in a TV segment aired on their Sports Channel; he was one of the Top Three national finalists for the "Phil Jackson" Positive Coaching Alliance Award (PCA) for his positive influence, treatment, and attitude with players.

Jack joined the VC team in 2017 and assisted with its transition over to LAVA VC in 2018, and returns to walk the sidelines for us again this coming season. Jack has been and continues to be a valuable mentor and member of our coaching staff here at LAVA VC.

Candice Bibb holds many roles here at LAVA Ventura "VC" - she is an excellent coach for LAVA VC, but also the lead coach for our Youth Lite and Non-Travel Juniors Programs as well.

The standout setter, opposite, and graduate of the Santa Paula High School has deep ties to the local volleyball community and has been sharing her passion for the game to the athletes of the next generation for almost a decade.

In 2016, Candice returned to her alma mater as Head Girls Varsity Coach, a position she still holds today, and takes immense pride in helping positively and caringly guide the next crop of young women to graduate from Santa Paula.

Bob Heulskamp joins the LAVA Ventura coaching staff for the first time this coming season and we are thrilled to have him on board. His full bio is coming soon.

Marketa Heulskamp joins the LAVA Ventura coaching staff for the first time this coming season and we are thrilled to have her on board. Her full bio is coming soon.

Manny De La Huerta is one of our excellent returning LAVA Ventura coaches. His full bio is coming soon.

Erika Lilley is one of our excellent returning LAVA Ventura coaches. Her full bio is coming soon.

Brittney Mukhar is a multi-year LAVA coach, who also coaches at LAVA West in Thousand Oaks. She will take the reins of a LAVA Ventura team, as well, this coming season. Her full bio is coming soon.

Rebecca Sexton is one of our excellent returning LAVA Ventura coaches. Her full bio is coming soon.

Cassidy Simental is one of our excellent returning LAVA Ventura coaches. Her full bio is coming soon. 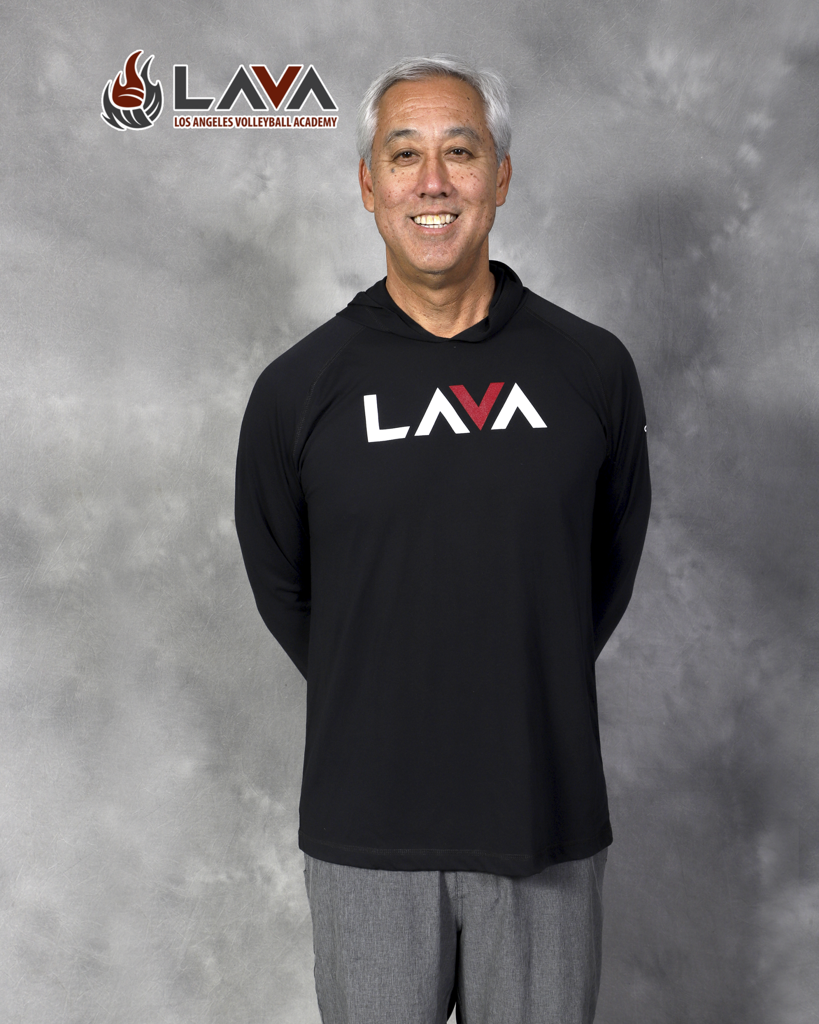 Steve "Yosh" Yoshimoto is one of the great volleyball community figures in Ventura County, having found immense success as a high school and club indoor and beach coach over many years of excellent service. Yosh was the founder of Ventura County Volleyball Club (VCVC), and after years of quality achievements joined forces with LAVA to form LAVA VC. In fall of 2020, Yosh hung up his clipboard and retired from coaching. We wish him all the best!

LAVA BIDS A FOND FAREWELL TO ONE OF THE GREATS, STEVE "YOSH" YOSHIMOTO!

October 2020 - It was a bittersweet moment when the Los Angeles Volleyball Academy (LAVA) was sad, but proud to announce that Steve “Yosh” Yoshimoto was retiring as Director of LAVA VC and SMBC VC, based in Ventura County (Camarillo).

In 2013, Yosh founded the Ventura County Volleyball Club (VCVC), the precursor to SMBC VC and LAVA VC, with its own two-court facility -- out of which VC still practices -- and both a boys and girls program, which were both highly respected in the club community and found instant success.

Based in Camarillo, LAVA VC Volleyball Club for Girls and SMBC VC Volleyball Club for Boys have been growing the game of volleyball in the area and offering exceptional travel team and non-travel programs to help serve the needs of the Camarillo and greater Ventura County volleyball community. The VC program operates out of the Bowman Center, its own exclusive, spacious two-court facility in the heart of the Camarillo outlets, located at 161 Plaza La Vista, Camarillo. The program fields eight to twelve boys and girls teams annually across the range of age divisions, as well as offers exciting and expanding youth and juniors non-travel training programs.

Yosh was succeeded as Director of LAVA VC by Brad Lyans.

We want to take one more moment to thank Yosh for his exceptional service to LAVA, SMBC, and the Ventura County volleyball community as a whole. We wish him all the best in his retirement and hope he will continue to stay in touch with our coaches, our athletes, and our program.